A group of people gathered around him. He then began to claim that he was a Mujaddid and inspired by Allah. In 1891 he took another step and said that he was the awaited Mahdi and the promised Masih.

In 1901 he claimed prophethood and thought that his prophethood was greater and higher than the prophethood of Hazrat Muhammad ﷺ. He gradually progressed in his claims until he died of Cholera in 1908 in Lahore and was buried in Qadian.

In 1914 a split took place in the Qadiani group with the accession of Mirza Bashiruddin Mahmood Ahmad, the 2nd successor; over definitions of doctrines forming the mainstream of the Qadiani group. They are respectively known as Qadiani and Lahori sects.

Both Qadiani groups fraudulently claim to be one of the Muslim sects but infect they are an unrighteous cult, kafir and non-muslim.

All schools of thought with all shades of Sunni, Shia and Ahl e Hadith etc are united in this stance and all major centers of learning including the Grand Muftis of Haram at Makkah and Madinah, Al Azhar University, and the World Muslim League representing 144 Muslim organizations have given clear decisions against the Qadianis and declared them non-Muslims.

The believers of the Qadiani religion believe in the following:

As soon as Mirza Qadiani claimed to be a Prophet. he faced challenges . Rebuttals from Muslims and Scholars from all schools of thought.

Mirza Qadiani openly claimed loyalty to the British crown. In his own writings assured the British Government of his unwavering loyalty thus providing evidence that who were his real masters and what was his real agenda.

There are many Prophecies that Mirza made in his life and reiterated quite a few of them in his books and advertisements time and again. They have been proven to be false later and it is part of history now. How come a person who tells a lie could be a prophet of Allah.

Although one instance of Falsehood is enough to prove anyone not to be a prophet of Allah. following passages five such instances are given which are declared in Mirza’s own books and they prove beyond doubt that in all these matters he was telling a lie and making false claims of getting revelation from Allah.

Prophecy About the birth of a son to Pir Manzoor:

Seeing that his prophecy has proven to be false Mirza explained that what he said did not mean that the boy would be borne just in this pregnancy rather a boy could be borne any time later in any next pregnancy.

But this also didn’t happen as Peer Manzoor’s wife died without giving birth to any other child. In this manner Mirza’s prophecy was proven totally false and his falsehood became evident to the World.

“Firstly this was revealed to me that a great earthquake that will be like the apocalypse is about to happen and for that I had been given a sign that the wife of Peer Manzoor Ludhianvi, whose name is Muhammadi Begum will give birth to a boy and that boy would be an indication for this earthquake”.

This is the sorry tale of Mirza Qadiani trying to marry a young girl, Muhammadi Begum, which he couldn’t till his death. But in the euphoria and desire to do so he kept on publishing his prophecies regarding this marriage:

None of that happened. The girl was married to a Muslim who lived a long life and did not die in two and a half years as claimed by Mirza, rather Mirza died in 1908 with the unfulfilled desire of marrying Muhammadi Begum. Mirza claimed in his prophecies that the fulfilment of this prophecy would be a proof of his truth. As it proved totally false, so historical facts bear witness to his lies.

In 1888, when Mirza Ghulam Ahmad Qadiani was fifty years old, he asked one of his relatives, Mirza Ahmad Beg for the hand of his young daughter Muhammadi Begum. Mirza Qadiani made it clear that he had been commissioned by God for that task and God had promised him, in unequivocal terms, and that this marriage would, therefore, certainly take place.

“The Omnipotent and Omniscient God has asked me that I should seek the hand of the elder daughter of this man (Ahmad Beg); should tell him that good conduct and courtesy to be shown to him would depend on this (i.e his acceptance of the marriage proposal); her marriage with me would be a source of blessing and a sign of mercy for her father;

And that he would have his share in all those blessings and mercies which have been laid down in the leaflet dated February 20, 1886 but if he declines to marry her, then the girl would meet an extremely tragic end.

The other person to whom she would be married would die within two and a half years after the day of the wedding, and so would die the father of the girl within three years, and her household would be afflicted with discord and poverty and adversity, and during the intervening period the girl would encounter several events of unpleasant and grievous nature”1 (ref: This announcement has been reproduced in full by the Mirza in Aina-e-kamalat-e-Islam, p 286. It has also been reproduced by Qasim Ali Ahmadi in Tabligh-e-Risalat Vol. I, pp 111-18)

In his work, Izala-e-Auham, Mirza Qadiani mentions his prophecy in the following manner:

“By way of prophecy the Exalted God revealed it to this humble one that ultimately the elder daughter of Mirza Ahmed Beg, son of Mirza Ghulam Beg, Hoshiarpuri, would be married to me.

These people would resort to great hostility and would place obstacles in the way, but in the end, it would surely take place. The Exalted God would, by all possible means, bring her to me, whether as a virgin or a widow, and would remove all impediments, and would, of necessity, fulfil this task, and none would be able to prevent it”

After mentioning his prophecy that he would ultimately marry the said girl, he said: “This should be clear to the people that there can be no better criterion of testing our truth or falsehood than our prophecy2”. (ref 2: Aina-e-kamalat-e-Islam, p 288)

Thus, the Mirza’s marriage with Muhammadi Begum was a settled matter, a matter which had been decided upon in the heavens and, hence, there was no possibility of any alteration. But as luck would have it, Mirza Ahmed Beg spurned the proposal and decided to give his daughter in marriage to another relative of his, Mirza Sultan Muhammad.

Mirza wrote various letters to the Girls father and her relatives, enticing them sometimes and threatening them most of the times. Many of such letters could be found in Kalmah-i-Fazl-i-Rahmani, by Qazi Fazl Ahmed (cited in Qaddiani Mazhab). This book is a collection of the Mirza’s letters to the relatives of Muhammadi Begum. The letters are authentic and even the Mirza did not deny having written them.

In his first announcement the Mirza had prophesied that the person to whom Muhammadi Begum would be married, would die within two and a half years after the marriage. This period elapsed the Mirza Sultan Muhammad remained alive, enjoying a happy married life.

Even after this Mirza insisted that his prophecy was true, and he had no doubt about its ultimate fulfilment. He again insisted that:

“I say again and again that the prophecy about the son-in-law of Ahmed Beg (i.e. Sultan Muhammad), is assuredly pre-destined. Wait for it. If I am a liar, this prophecy will not be fulfilled, and my death will come”.4 (ref 4. Aajam-i-Atham, p. 31)

Mirza Sultan Muhammad had a long life. He took part in the first world war. He was wounded during the war but survived and remained alive long after the Mirza had died.

As for the Mirza, he died in 1908, and his wedding which according to him had taken place in the heavens, could not take place on earth.

Prophecy about Mirza Qadiani’s Death after his Challenge to   Maulana Sana Ullah Amritsari:

Maulana Amritsari did not die even after forty years of Mirza’s death however the great liar and fraudster, Mirza Qadiani died of Cholera just one year after he made this prediction.

When in 1891, the Mirza declared that he was “Mehdi” (the Promised Massiah) and later in 1901, that he was a prophet of God, the Muslim scholars began to refute and oppose him. Among those prominent in opposing him was Maulana Sana Ullah   Amritsari, the editor of Ahl-i-Hadith. On April 5, 1907, Mirza Ghulam Ahmed issued an announcement in which, while addressing Maulana Sana Ullah Amritsari, he wrote:

“ If I am such a big liar and impostor as you portray me in each issue of your magazine, then I will die in your life-time, for I know that the life-    period of a mischief-maker and liar is not very long and ultimately he dies an unsuccessful man, during the life of his greatest enemies and in a state of humiliation and grief.

And if I am not a liar and impostor and have been honored by God’s communication and address to me.if I am the promised Massiah.I hope that with the grace of God and in accordance with God’s practice you will not escape the punishment of the rejectors (of Truth).

Thus, if that punishment which is not in man’s but in God’s hand, that is, fatal disease like plague and cholera, do not  afflict you during my lifetime, then I am not from God.(Ref 1: Tabligh-i-Risalat, Vol. X, p. 120)

One year after the publication of this announcement, on May 25, 1908 the Mirza fell ill, being afflicted with diarrhea at Lahore. Along with loose motions, he also had vomiting. He was put under treatment at once, but weakness increased, and his condition became critical. The next day, on May 26, he breathed his last in the forenoon. (Ref 2: Hayat-i-Nasir, ed. Shaykh Yaqub Ali Irfani)

It would be interesting to note that Maulana Amritsari died at the age of eighty on March 18, 1948 some forty years after the death of the Mirza.

This prophecy is concerning the death of a  Christian, Abdullah Atham. Mirza had fixed a period of fifteen months beginning from 5th June 1893 for it (i.e. up to 5th September 1894). He,   then repeated it on page 80 of his book, Shahadat-e -Quran, as a sign and criterion of his truthfulness that Abdullah Atham was about 70 years old at that time his death within the period fixed by Mirza was, after all, not something that could not be thought of).

But as Allah intended to expose the bluff and falsehood of Mirza Ghulam Ahmad, old Abdullah   Atham not only did not die within the stipulated period but also went on to live for another two years. He died on July 27, 1896 and this fact was also confirmed by Mirza himself in his book Anjam-i-Atham.

Prophecy about Mirza’s place of Death:

Mirza Claimed about his place of death in his books and said that he would die either in Makkah or in Madinah Munawara. References (Al Bushra, P 155, Tazkarah Jadid P  591, Tazkarah old edition P 584)

But this is an established fact that Mirza died in Lahore from Cholera,rather he never visited Makkah or Madinah in his lifetime. In Seerat Al  Mahdi (vol 3, page 119) it is written “Dr Muhammad Ismail told me that promised messiah (Mirza) never performed Haj or Itikaf, did not pay zakat.”

Similarly, in Seerat Al Mahdi Vol 1 P 11 it is written that Mirza died of Loose Motions in Lahore in his toilet. This statement clearly states the place of death of Mirza thus negating his prediction of dying in Makkah or Madinah.

The Finality of the Prophethood 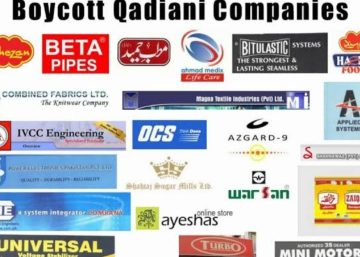 Some of the biggest Ahmadi-owned companies in Pakistan pay the most chanda to the Mirza...